Oct. 10, 2011:  My friends Ron and Leslie recently came to Pristina.  Ron came at my request and taught a four-day class on Public Corruption.  Ron did a great job and the class was well received.  The class ended Friday and Saturday we flew to Dubrovnik Croatia.  I had not been to Dubrovnik nor had my friends.   They had decided to stay on Europe a couple of weeks after leaving Kosovoand Leslie’s parents were meeting them in Dubrovnik for the week-end and then the four of them planned to drive through a good part of Europe  before heading home.

My plan was to go to Dubrovnik over the Columbus Day week-end and come back to Pristina on Monday evening.  I was able to find a round trip flight for about $200.00 and we all headed out of Pristina on the 5:55 a.m. Croatian Airlines flight to Zagreb.  There is no direct flight between Pristina and Dubrovnik and we had a seven hour layover before our connecting flight.  This turned out not to be a bad thing though as we caught a taxi to the downtown and since I had been to Zagreb previously I got to play tour guide to Ron and Leslie and take them on a whirlwind tour of “old town” Zagreb.  As I have written about Zagreb before I will not repeat myself.  I think Ron and Leslie had a good time and it was definitely time better spent than sitting at the terminal all day.

After returning to the airport we boarded the one hour flight to Dubrovnik and upon landing Leslie’s parents were there to pick us up. Leslie has found a three bedroom apartment to rent for the week-end and her parents had already been in it a couple of days before we arrived.  The apartment was nice and the price included Wi-Fi.  After dividing the cost five ways I ended up spending 32 Euros on lodging for the week-end.  Not bad at all.  The only drawback to the apartment was that it was about 560 stair steps up the mountain from the Walled City portion of Dubrovnik.  That was a bad thing for repeated trips back and forth to the apartment but did afford a great view of the city.

Dubrovnik is a beautiful city.  It is probably the prettiest city on the eastern Adriatic.  It is a wonderfully preserved walled fortress and the Croatian people are rightfully proud of it.  It is the type of place that is just a little too perfect for you to believe that it is real.   The walls are kept in top condition, no ruins here.  The city within the walls is exceedingly clean (especially by Balkanstandards) it is rare to see graffiti or trash anywhere in the city.  It is a living city with people running businesses and staying  in the apartments and generally going about the business of going about their lives the best that they can.  There are a number of beautiful churches in the town, museums, restaurants and apartments/hotels to rent.

There is an outdoor market in the mornings and many shops.  Dubrovnik is pretty thoroughly western, and the prices of everything reflect that.  Food was expensive by Balkan standards and I didn’t see any particularly good deals in the shops.  Our apartment which was about ¼ mile outside of the walls was reasonably priced, but even though it was the “off” season nothing else really seemed to be.

Three day week-ends in Pristina are prime travel opportunities. Upon seeing that the three-day Easter week-end as coming up I went to one of the many local travel agencies in Pristina and asked if they have any travel deals. They told me indeed there was a special which included airfare on Croatian Airlines, and two-night stay (Sat and Sun) in a five Star hotel in Zagreb, Croatia for 289 Euros. I decided to book the trip and during the booking it turned out the price had dropped to 238 Euros. YES!

I had to catch the flight to Zagreb at 0555 Saturday morning which was, both good and bad. Bad because I had to get up at about 0400 to get to the airport and catch the flight, good because I would be in Zagreb by 0730 and have three full days to explore. The ride to the airport and the flight were uneventful. I learned that one of the cab companies will take you to the airport for 17 euros instead of the normal 20-25 if you have them pick you up outside the embassy, which is only a couple of blocks from my apartment.Since this was a last-minute trip I had not studied up on Croatia or Zagreb before leaving, and hadn’t learned a word of Croatian. Upon arriving I was pleasantly surprised. Croatia looked and felt like a Western European country. The roads were good, well-marked and people seemed to actually pay attention to the operational traffic control devices. I took a bus to the main bus station downtown; the driver spoke English and didn’t seem to mind making change when I paid him for the ticket. The hotel was only a few blocks from the bus station so I walked there. As it was 7:30 in the morning I was going to ask them to hold my luggage until check in time but they told me my room was available and I could check in early.
…..More to come….

….  It has been a month since I went to Zagreb, and unfortunately memories fade.  Since then I have been to the US and back, spent a couple of working week-ends at a small resort in Kosovo, and as I write this I am sitting on a veranda overlooking the Aegean Sea in North-eastern Greece.  I have forgotten some of the details but I will try and summarize Zagreb as best I can.Zagreb was a lovely city.  I would like to go back, heck I would like to live there…   I spent almost all of my time there in the old part of the city, which is particularly attractive.  Zagreb, as the capitol of Croatia, has many parks, museums and green spaces.  I’m not sure about this but I think the primary architectural style is “Hapsburg.”  Whatever it is it seems that most of the older buildings were built around the turn of the last century, they tend to be about three or four stories and have (what appear to be) ornate stone carvings decorating them.  I took a bunch of pictures some of which I will try to post here.

The hotel I stayed was very nice, the advertisements claimed “5-star” and I wouldn’t argue that. It was well situated about a 5-10 minute walk from the center of downtown.  Downtown Zagreb has a modern tram, bus and light rail system which make getting around town very easy, but most things you’d want to see as a tourist are situated closely enough together that you can walk pretty much everywhere.  Many of the streets were cobblestone and parts of the old city wall are still standing.  My only significant complaint about Zagreb was that many of the buildings were heavily painted with graffiti on the first story and there seemed to be no effort to remove it.  Other than that it had the look and feel of a Western European city.  I would guess their admission to the EU will happen soon. 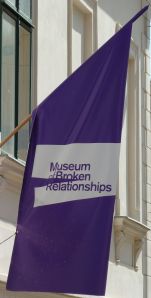 The food there was without exception very good, though it seemed to be more expensive than Pristina.  It is hard to tell because Croatia has its own currency which is worth quite a bit less than a Euro buts still has some value.  Food seemed to be significantly influenced by Italy though sausage (which I tend to think of a more northern European) seemed to be popular there.  I ate everywhere from a couple of very nice restaurants for dinner to a Pizza place and a stand on the corner selling sausage.  Breakfast was included with the hotel room.

I spent most of Saturday exploring the City and going to Museums.  I also found a

large market place and spent some time walking around the market, I bought a bottle of the local liquor and some local honey. Easter Sunday was spent basically lying around in the parks reading and generally relaxing.  On Monday I took the tram to the end of the line and then caught a bus to the top of the mountain overlooking Zagreb and went hiking at a local ski resort.  It was a nice ride and a very pretty hike.  Much Gelato was consumed all three days.My flight back to Pristina left about 2300 and the plane landed in Kosovo about 2330 without incident.  Thus ended the trip to Zagreb.

A few words on work and the blog…

In case anyone is wondering, I do actually have a job - in Belgrade Serbia. I am required to work twenty-two days per month. I mention this only because so many people have asked.

While I am writing it seems like a good place to mention some of my self-imposed guidelines with regard to this blog. They have evolved since I started. It boils down to this:

1. My objective in this blog is primarily to discuss my travels in Europe and to write about life as an American expat.

2. I don’t write specifically about my work - much, because I am not supposed to. I have signed a non-disclosure agreement so I just avoid writing about work to avoid problems.

3. I have also decided generally to avoid talking about people I know, work or associate with here in Southeastern Europe. They may not want to be mentioned in my blog, or their work may be such that they shouldn't be mentioned.

4. On the rare occassion when I mention someone I only use their first name. I also try to avoid showing pictures of the same people I mentioned above.

5. On occasion when something off topic of interest comes up I reserve the right to write about it as well.